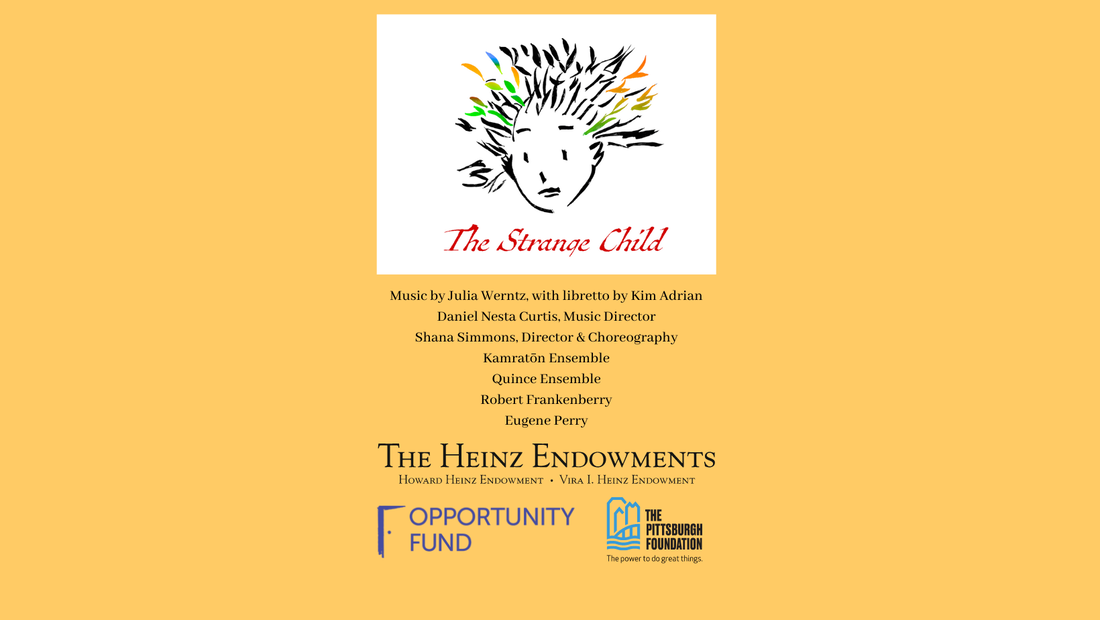 The Strange Child takes place in a bucolic village, where the lives of siblings Christlieb and Felix are upended by the arrival of two strangers: a cruel tutor named Master Inkblot, and a mysterious sprite who lives in the woods. Weird and magical happenings culminate in a violent struggle in which imagination itself is at stake. ​

Synopsis of The Strange Child: An Opera in Four Acts
Based on E.T.A. Hoffmann’s “Das fremde Kind”

(Which takes place in a 19th century German hamlet, at the secluded home of Sir and Lady von Brakel, and in the nearby woods.)
​
Music by Julia Werntz
Libretto by Kim Adrian
Music Director, Daniel Nesta Curtis
Direction and Choreography, Shana Simmons

Act One
Scene 1 — The Hamlet of Brakelheim
Count Cyprianus and his family arrive in the small village of Brakelheim to visit his humble cousin, Sir Thaddeus von Brakel, and his family.
Scene 2 — A Visit
The two families have a tea party and discuss the education of children. Class tensions are high. Christlieb and Felix are given gifts by their cousins.

Act Two
Scene 1 — Presents
Christlieb and Felix open their gifts—a doll and a toy huntsman. With excitement, they take their new toys into the woods to play, but soon grow frustrated with the inert playthings, and toss them in a pond.
Scene 2 — Master Inkblot
A letter arrives from Count Cyprianus advising Sir Thaddeus to raise taxes on the villagers. The children meet their new tutor, Master Inkblot (who also has been sent by the Count).
Scene 3 — The Strange Child
In the woods, the children meet the Strange Child, who teaches them how to play without manmade toys.
Scene 4 — An Odd Story
Sir Thaddeus and his wife, Lady von Brakel, question their children about their encounter with the Strange Child.

Act Three
Scene 1 — The Fairy Queen and Pepasilio
The Strange Child tells the story of their mother, the Fairy Queen, and her feud with Pepasilio, King of the Gnomes—who is part fly.
Scene 2 — The Lesson
During a lesson, Master Inkblot loses his patience with Christlieb and Felix and threatens violence. Sir Thaddeus intervenes, insisting Inkblot take the children for a walk in the woods to get fresh air.
Scene 3 — Taxes
Villagers arrive to pay Sir Thaddeus their new taxes (as suggested by Count Cyprianus). Sir Thaddeus has a change of heart and sends them away without their paying.
Scene 4 — The Toys
The children, in the woods with Inkblot, grow frightened of their tutor, who calls the discarded toys back to life. The toys chase the children out of the woods.

Act Four
Scene 1 — The Battle
The children run home to Sir Thaddeus and Lady von Brakel. Inkblot, transformed into a gigantic fly, comes bumbling after, and everyone realizes that he and Pepasilio are one and the same. After a great struggle, Sir Thaddeus chases Inkblot away.
Scene 2 — Another Letter
A new letter arrives from Count Cyprianus, in which he evicts the von Brakel family because of a debt they owe him. Sir Thaddeus dies as a result of Inkblot’s terrible magic.
Scene 3 — Onward
Lady von Brakel, Christlieb, and Felix bid farewell to their beloved village and villagers. The Strange Child’s presence is felt by all as the small family departs.