​Violinist Jennifer Sternick is an active and enthusiastic freelance musician. She performs professionally as a soloist and as a member of symphony orchestras, pit orchestras, chamber ensembles, and new music ensembles. Routinely holding leadership positions, Jennifer has been the Concertmaster of Berks Sinfonietta since its inception in 2014, has held the Concertmaster chair of the Pittsburgh Civic Orchestra from 2012 until 2017, and was most recently appointed Concertmaster of the Washington Symphony Orchestra in 2019.

Jennifer's passion for new music is evidenced in her role as founder, President, and violinist of Kamratōn, a non-profit chamber music organization dedicated to women in new music, the arts, and in business. She enjoys working with living composers, musicians, dancers, and other artists to design and realize concerts that make new music more accessible to the audience.
​
Originally from the outskirts of Mohnton, Pennsylvania, Jennifer grew up studying violin with Barbara Lanza. She then earned her bachelors in music and philosophy at the University of Pittsburgh, summa cum laude, where she studied with Roger Zahab. Post-University, she studied with Huei-Sheng Kao of the Pittsburgh Symphony Orchestra. Jennifer is the recipient of the Mildred Miller Posvar Award for Distinguished Academic Achievement in Music and the Alfred D’Auberge Award for Excellence in Music Performance. When Jennifer is not making music, she is an avid cyclist, runner, and rock climber. 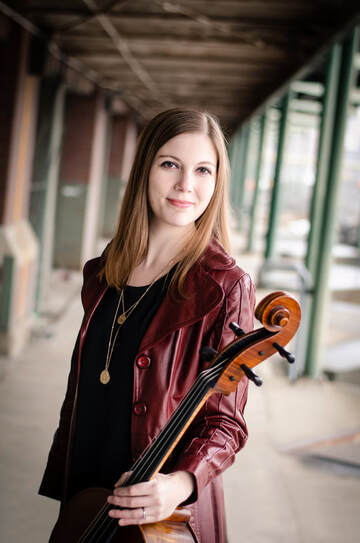 Cecilia Caughman holds a Master of Music degree and an Advanced Music Studies certificate in cello performance from Carnegie Mellon University, where she studied with Anne Martindale Williams. She was a member of the Honors String Quartet and co-principal cellist of the CMU Philharmonic. Currently, Cecilia performs with numerous regional ensembles, including the Johnstown Symphony Orchestra, Erie Philharmonic, and Westmoreland Symphony Orchestra. Certified as a Suzuki cello teacher, Cecilia maintains an active teaching studio in Pittsburgh.
​
A native of Shaker Heights, Ohio, Cecilia earned a Bachelor of Music degree from the Cleveland Institute of Music, studying with Richard Weiss. During her senior year, she served as principal cellist of the Cleveland Women’s Orchestra and as the Librarian of the Cleveland Orchestra Youth Orchestra.
​
Cecilia has spent her summers at the National Repertory Orchestra, Round Top Music Festival and Chautauqua Institution Music Festival, among others. She has played in masterclasses for cellists Desmond Hoebig and Richard Aaron and has been coached by the Pacifica and Cavani String Quartets, as well as Peter Salaff, Noah Bendix-Balgley and Alisa Weilerstein. 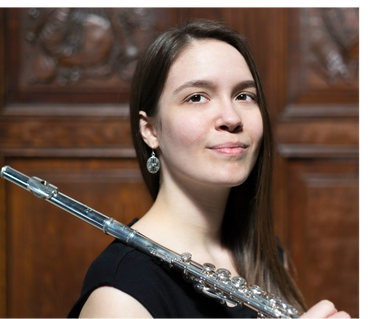 Pittsburgh-based flutist Sarah Steranka enjoys a multifaceted career as a recitalist, chamber musician, and champion of new music. Since making her solo debut with the Carnegie Mellon Philharmonic at the age of nineteen, she has been featured in concert throughout the US and worldwide. Additionally, she has been named a finalist and prizewinner in many national and international competitions, including the International Low Flutes Festival’s Alto Flute Competition and the Flute New Music Consortium’s Flute Artist Competition.

​Sarah is dedicated to exploring the innovative work of living composers and pushing the boundaries of flute performance. Recent additions to her repertoire include world premieres by Ramin Akhavijou, Marilyn Shrude, Elizabeth Brown, Zvonimir Nagy, and Nancy Galbraith. Sarah has appeared in Music on the Edge’s Beyond Microtonal Music Festival, The Pittsburgh Festival of New Music, and The Cleveland Uncommon Sound Project’s Re:Sound festival. Her recordings of many of these commissions have been published by Naxos.

Sarah is the second flutist of the Westmoreland Symphony and is a core member of nationally recognized new music ensembles Kamratōn and Alia Musica. As an educator, she maintains instructional positions at Carnegie Mellon University, the Pittsburgh Flute Academy, and I AM Music Academy. She has also appeared as a guest artist and lecturer at the Woodlands Foundation, West Virginia University’s International Flute Symposium, and the Schwob School of Music at Columbus State University.

Sarah Steranka holds a BFA from Carnegie Mellon University where her principal teachers were Alberto Almarza and Jeanne Baxtresser. 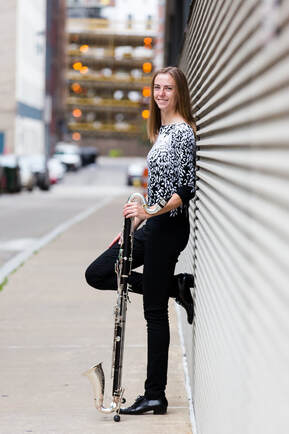 Emily Cook is a performer, composer, and educator who splits her time between Pittsburgh, PA and Bloomington, IN. She performs in the clarinet sections of the Evansville Philharmonic, Johnstown Symphony Orchestra, and Champaign-Urbana Symphony Orchestra, and she has also performed with the Pittsburgh, Richmond, Hartford, Williamsburg, Akron, and Wheeling symphonies. Emily is dedicated to performing new music, regularly appearing with Pittsburgh’s Alia Musica and serving as the clarinetist and artistic director of Kamratōn.  Emily has also appeared with jazz/world group the Afro-Yaqui Music Collective and is active as an improviser. Her collaboration with modular synthesizer performer Dana Ma released on Crucible Records was listed as among the best experimental music released on Bandcamp in November 2019.

Emily earned degrees in music performance and education at Duquesne University and Lawrence University, where she studied with Ron Samuels and David Bell.  She has presented her research on the music of Kaija Saariaho at SUNY Buffalo and the CUNY Graduate Center.

Emily leads the instrumental music program at St. Vincent School in Bedford, IN and formerly served as the choir accompanist at Dutilh United Methodist Church in Cranberry, PA. She is a native of Western Illinois and enjoys hiking, coffee, and growing tomatoes. 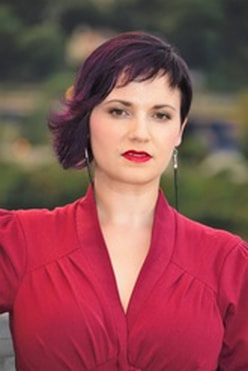 Soprano Anna Elder’s voice has been described as being, “ethereal” or “a voice that has blues, reds and purples in it” by The New York Times or “a voice that could match, pitch for pitch, the grumble of a truck’s engine or squeak of a scooter’s horn.”-  Wilmington Star News. She is a native of Pittsburgh, PA and currently performs with the new music ensembles Kamratōn and wolfTrap. Most recently, Anna was a featured artist at The Tanglewood Music Center, where she sang Andrew Hamilton’s “Music For People Who Like Art” with The New Fromm Players at Tanglewood’s Festival of Contemporary music. This 2019-2020 season she will appear in Music on the Edge’s production of Roger Zahab’s opera, “Hegemony,” and continue to perform and commission new works with wolfTrap and Kamratōn. She appeared in the Corningworks’ production of “with a shadow of...” as a stand in vocalist for an ill cast member. “While an unanticipated addition, Elder’s superb voice and inclusion on stage was seamless and enriching.  Her sequence with Brenner, in which they perfectly mirrored each other while performing a particularly tasking and complex choreography, is so unspeakably scintillating that one could scarcely imagine it hadn’t been planned from inception.” -Pittsburgh in the Round.

She has also appeared with Pittsburgh’s Alia Musica, Nat28, Opera On Tap and The Eclectic Laboratory Chamber Orchestra. Anna was the lead vocalist with Squonk Opera for three years and premiered Go Roadshow and sang in the Off-Broadway version of Mayhem and Majesty, where she was described as creating “a sort of persona that becomes tangible which takes shape and begins to define what unfolds on stage.” -Broadway WorldOther engagements have included performing Music for 18 with New Music Detroit and appearing as a guest vocalist with Quince Ensemble. She has appeared on Music on the Edge’s Beyond Microtonal Music Festival, The Pittsburgh Festival of New Music, Detroit’s Strange and Beautiful Music 2017, and The Cleveland Uncommon Sound Project’s Re:Sound festival. Anna graduated from The Eastman School of Music where her teachers were John Maloy and Constance Haas. She has since attended New Music On The Point in Vermont for two summers where she studied with Tony Arnold.

Ms. Elder intends to push the limits of the human voice and enjoys commissioning new contemporary works that take her there. She experiments and improvises with found objects such as fans, cat toys, aluminum foil, and her own heartbeat. Her repertoire includes works by Giacinto Scelsi, Georges Aperghis, Cathy Berberian, Charles Ives, Anton Webern, Kaija Saariaho, Arnold Schoenberg, Franz Schubert, and Claude Debussy. She has premiered works by Curtis Rumrill, Ryan McMasters, David Gerard Matthews, Laura Schwartz, Christine Burke, Lu-Han Li, and Brian Riordan. With Kamratōn, she will premiere a new piece by Elizabeth Brown in March and Her Holiness The Winter Dog, an opera by Curtis Rumrill for Kamratōn, Quince Ensemble, and Shana Simmons Contemporary Dance in May. Anna has spearheaded the annual concert series She Scores, which features works by living women composers for Kamratōn. The ensemble has received support from The Opportunity Fund, The Heinz Endowments, and The Pittsburgh Foundation. Anna can be heard on the album Squonk Opera’s “Go Roadshow” and can be seen anywhere from a basement to a concert hall.